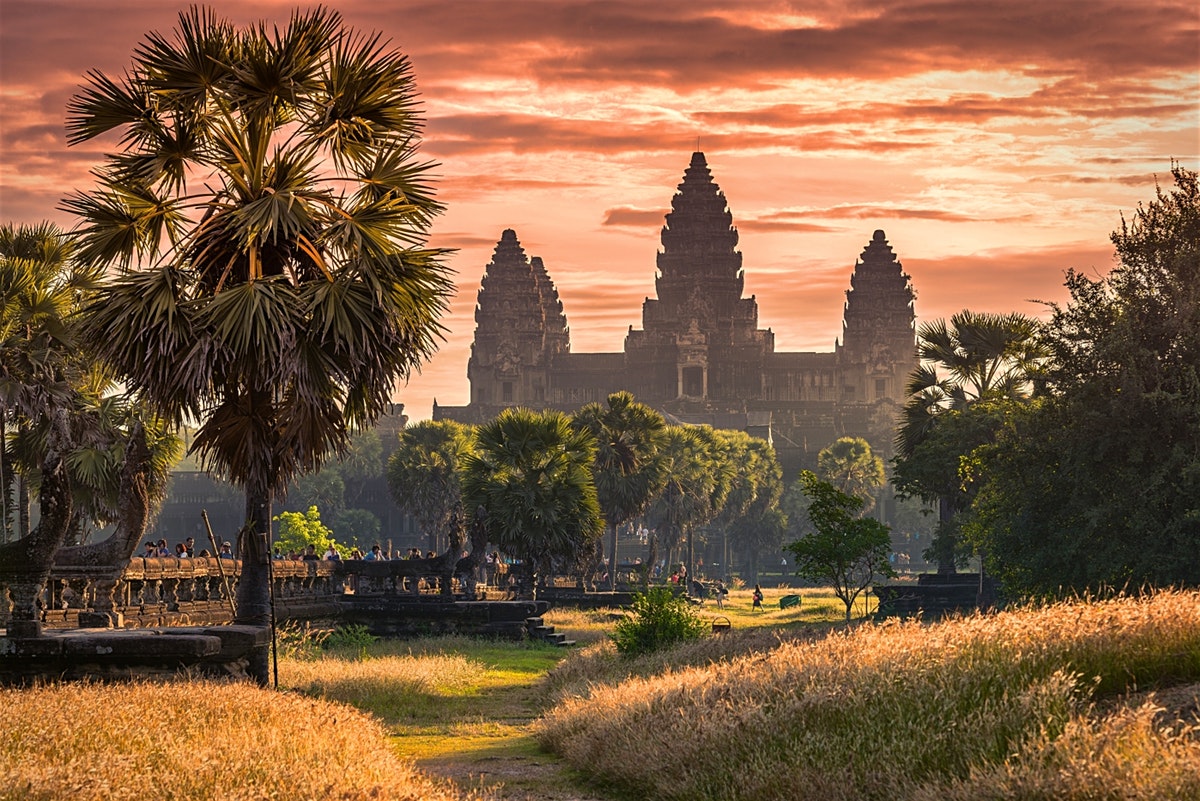 Detailed Itinerary of 08 days Cambodia Tour is as appended below.

Upon arrival, when you leave the airport terminal please look for a tour guide displaying a welcome signboard with the Trails of Indochina/Ker & Downing logo and your name. Please refer to the Pre-departure document which will be sent upon confirmation for specific details and a photo of the welcome signboard. Transfer to your hotel. After check in, enjoy some free time until later in the afternoon.

Visit in the afternoon the Royal Palace. The Royal Palace and Silver Pagoda are two of the most striking buildings in the capital and considered as some of the finest examples of Khmer architecture. They were initially constructed in 1866 by the French. The Royal Palace is home to the current King Sihamoni. The neighboring Silver Pagoda stands out in its own distinctive way. The floor consists of 5,329 solid silver tiles to which the building owes its name. The building houses many gold and jeweled Buddha statues including the highly prized 17th century baccarat crystal Buddha. Other important buildings that can be found within the compound include Wat Preah Keo Morokat, where Royal ceremonies are performed, and stupas such as King Ang Doung Stupa – the burial site of former King Norodom. Return to the hotel and prepare for a delightful dinner at one of Phnom Penh’s top fine dining restaurants; Van’s.

Phnom Penh is nowadays a bustling city and its ochre-colored colonial buildings, bustling squares, trendy cafés, and frangipani-lined boulevards create an atmosphere that is unlike any other city in Southeast Asia. On this half day tour, discover the city in more detail with a French Anthropologist and linguist who has been based in Cambodia for many years. Follow the city’s history through five distinct periods: French Protectorate, Norodom Sihanouk years, The Khmer Republic, Democratic Kampuchea, and the People’s Republic of Kampuchea while walking short distances through typical neighborhoods. Bid farewell to your special escort and return to the hotel for lunch on your own.

This afternoon is dedicated to the more recent past of Cambodia, the dark ages between 1975 and 1979. Visit the Toul Sleng, which was a high school prior to 1975 and was transferred into an interrogation prison known as S-21 during the Khmer Rouge era. It tells the sad story of the thousands of innocent Cambodian people who were tortured on its grounds. The afternoon and journey through the dark years is ended at the peaceful stretch of green fields of Cheung Ek. The site was made famous by the movie “The Killing Fields”. Nowadays, a large memorial has been built to commemorate the 17,000 victims who died here under the reign of Khmer Rouge leader, Pol Pot. Return to the hotel and remain free for dinner.

After breakfast, depart for Sihanoukville, Cambodia’s premier beach destination. The city itself is an ever-growing destination with now many quality investors putting their feet on the white sand beaches of the city. The real beauty however lies off shore. The Koh Rong Archipelago is located only 30km from the shores of Sihanoukville and offer island life you have always dreamt of.

After a 4 hour ride by private vehicle (or private charter flight from Songsaa), you will arrive at the pier in Sihanoukville. The captain and staff of the resort will welcome you and help you to get onboard the luxurious speedboat. Enjoy a 30 minute transfer to the island and check into your villa. The remainder of the day you are free to choose any of the activities that the resort offers. Everything is included in your stay and you may even select the venue for your private dinner tonight, which may be near the pool, on the beach, at your villa or at any other romantic spot that you discover on the island.

Enjoy breakfast, served at any location you may desire and indulge in luxury for the remainder of the day. You may indulge in a spa treatment or go off the beaten track and participate in mangrove or sea kayaking activity, a local village tour, go Paddy diving, snorkeling or enjoy a personal tour of the island by a marine biologist.

The list of activities on and off the island is much longer than we can mention here and upon check in at the resort and on a daily basis you may chose your own activities. Lunch and dinner are included and once again you may select yourself the venue of enjoying your fine dine dishes.

Enjoy breakfast at the resort and more activities on the island. At 2PM a guide will bring you to the shores of Sihanoukville. Transfer in the mid afternoon to the shores of Sihanoukville by speedboat. Upon arrival at the pier a private car will bring you to the airport from where a domestic flight of around 1 hour brings you to Siem Reap, the gateway to the temples of Angkor. Arrive in Siem Reap in the late afternoon and transfer to your hotel for check in. Remain free at leisure.

After breakfast depart for a visit to Angkor Wat, one of the modern wonders and most important religious monuments in the world, with a renowned Khmer scholar. He will be able to share his vast experience and give you a concise overview of Khmer history, culture, archaeology and civilization. He has been working with the Angkor Temple Conservation Institution for many years and has a detailed knowledge of the temple’s history as well as how they will be preserved in the decades to come. Take a stroll through the elaborate carved hallways of Angkor Wat as the Khmer empire is brought to life through the scholar’s explanations of the various stories contained in each of the bas reliefs and murals. Return to Siem Reap for lunch and relax. In the afternoon, return to the Angkor complex and visit Angkor Thom, the ancient royal city of the Khmer Empire with its centre piece; the Bayon temple. As you approach, you will notice the enigmatic faces of former King Jayavarman VII looking into every direction. Your guide will take you to the Terrace of the Elephants, which served as a platform from where the King could welcome back his victorious army and the Terrace of the Leper King, which holds detailed carvings winding along a narrow passage way that leads to the Baphuon complex. End the day with a visit to Ta Prohm, considered to be Angkor’s most beautiful structure and is overgrown with fig trees, giving a haunting yet exotic atmosphere. The magnificent roots of the trees have merged itself over the centuries with the temple’s huge stone blocks, emphasizing a ‘forgotten city’ feeling. Opt for a sunset at Pre Rup, a much quieter alternative than Phnom Bakheng before returning to Siem Reap for a free night.

Leave Siem Reap for Chhong Kneas, a real trading port of agricultural and fishery products. Primarily inhabited by Vietnamese families, Chhong Kneas offers a very different view of life in Cambodia. Board our traditional wooden boat and disembark on an adventure that teaches more about the Tonle Sap Lake and its biodiversity and the Khmer rural culture. Enjoy the sights of the floating village of Chhong Kneas and receive an expert’s presentation of the lake. Arrive shortly afterwards at Me Chhrey and meet with a local family at their home. Continue with a visit around the village and meet with local monks who have prepared a blessing for you. After this interesting activity head for the port of Me Chhrey where you disembark and climb aboard a tuktuk. Enjoy a ride of about 30 minutes through a beautiful landscape. Take in the rural scenery before reaching a traditional Cambodian Pagoda. This is the final stop of the journey and a car awaits you to bring you back to your hotel in Siem Reap for lunch.

Remain free this morning until the guide and driver transfer you to the airport for your flight out.